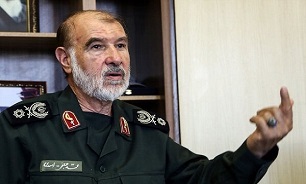 "The culture of resistance against tyranny and arrogance gradually moved beyond the Iranian borders with the culmination of the Islamic Revolution especially after the eight years of Sacred Defense (Iraqi imposed war against Iran)," he added.

“Presently, we are witnessing the formation of Resistance Front in the region and this has created hope for the oppressed and fears for the Arrogance as well as Zionist mercenaries," he said.

With regards to the emergence of Islamic Awakening in the region and plots orchestrated by the US and reactionaries in the region for eliminating Islamic awakening, he said, “what is currently happening in Iraq is due to plots hatched by some regional countries especially Saudi Arabia for covering up their recent failures.”

Brigadier General Asadi pointed to the resistance of Yemeni people against aggression of Saudi Arabia and added, “as Iranian people resisted against oppression and tyranny during eight years of Sacred Defense, we believe that Yemeni people will attain victory against Saudi Arabia, as well.”