TEHRAN (defapress)- Iranian President Hassan Rouhani, in a meeting with his Venezuelan counterpart Nicolás Maduro on Friday in Baku, hailed the strong and supportive ties between Tehran and Caracas, and voiced his country's readiness to transfer experience to Caracas in different fields of economy and technology.
News ID: 79080 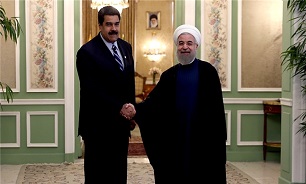 In a meeting with President Maduro on the sidelines of the Non-Aligned Movement (NAM) Summit in the Azeri capital of Baku this morning, President Rouhani said the two countries of Iran and Venezuela have supported each other in all political and international assemblies.

“Other than strengthening financial and banking cooperation, the Islamic Republic of Iran is ready to transfer its experiences to Venezuela in the technical and agricultural fields, cyber infrastructures and modern technologies,” he added.

The Islamic Republic of Iran is ready to expand its relationship with Venezuela wholeheartedly, Rouhani added.

The cooperation and interaction of two countries of Iran and Venezuela can help strengthen bilateral ties in international levels, he emphasized.

Rouhani further reiterated that the United States has not been successful in any of its plans in the Middle East region.

The Iranian president reiterated that the United States has failed to advance its plans in the Middle East region, ranging from Iraq, Syria to Palestine, Afghanistan, and Yemen, in a way that all its plots, orchestrated against the Islamic Republic of Iran, have failed.

He hailed the resistance of Iranian and Venezuelan nations in failing US plots in the international arena and added, “the two countries gave a good lesson to the US with their resistance and perseverance.”

In this meeting, President Rouhani invited his Venezuelan counterpart for an official visit to the Islamic Republic of Iran.

For his part, Venezuelan President Nicolás Maduro called for increased expansion of the bilateral relations between Iran and Venezuela and emphasized, “with their resistance against US excessive demands, the two countries of Iran and Venezuela forced the US to withdraw and accept defeat.”

Presently, all independent states have formed a united front against US extremist behaviors and this is very valuable, Maduro added.

Before leaving Tehran for Azerbaijan on Thursday, President Rouhani stressed that his nation is not vulnerable to the plots, pressures and sanctions imposed by Washington and its allies.

"Today, there is no doubt that the Islamic Republic of Iran is a very important and influential country in the region, and this great nation will not be defeated by the conspiracies of the enemies, especially the US and their embargo," he underlined.

"In these circumstances, it is more important for us to attend such summits than ever before and I am pleased that the Islamic Republic of Iran has been more active in regional unions and treaties in recent years."

Stating that Iran has recently signed an interim agreement with the Eurasian Economic Union (EAEU) and attended their summit in Armenia and attended the ECO, Rouhani said that Iran has always been active in the Organization of the Islamic Cooperation (OIC) and Non-Aligned Movement and currently we are actively involved in these organizations.

Rouhani pointed out that in recent years "we have started trilateral activities with other countries in the region, saying, "A summit on the Astana Process between Iran, Turkey and Russia; a summit between Iran, Azerbaijan, and Russia; another one between Iran, India, and Afghanistan; and other summits that we attend at the regional level are among these."

The President emphasized, "All these summits and meetings and Iran's presence in them are based on the view that the Islamic Republic of Iran should have a more active presence in the region and around the world. Our national interests and security in relation to other countries will be better served this way."

Referring to the 18th Non-Aligned Movement Summit in the Republic of Azerbaijan, Rouhani said, "I am going to both deliver a speech and have bilateral meetings with the heads of states participating in the Summit".

He stated, "Iran's relations with the Republic of Azerbaijan have become so much closer during the past six years."

The Iranian president referred to Iran, Azerbaijan and Iraq as the three Shiite countries in the region, adding, "Relations with Azerbaijan, as a friendly and neighborly country, are of great importance to us, and we have deep historical and cultural ties with each other, and our relations are moving toward strategic ones."

President Rouhani added, "We have signed very important agreements with Azerbaijan on the Caspian Sea that should be implemented and put into operation, and we have started good cooperation in the field of oil and gas exploration and transit, as well as the Astara-Astara railway connection".

"The second day of the visit will be mainly with NAM member states," he noted.

Elsewhere, Rouhani underlined that in the past six years the relations between Iran and the Republic of Azerbaijan have been improved a lot and are moving toward becoming "strategic."

"This visit is taking place at the official invitation of the President of Azerbaijan (Ilham Aliev) to attend the 18th NAM Summit," he said.