TEHRAN (defapress) - Britain's government denied a newspaper report on Saturday that it will seek to weaken workers' rights after Britain leaves the European Union, with one minister describing the idea as "completely mad".
News ID: 79100 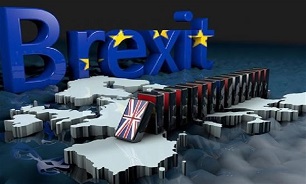 The Financial Times published extracts of leaked documents from the government's Brexit ministry which state that a so-called "level playing field" commitment to the EU "leaves room for interpretation".

The EU is concerned Britain may try to loosen regulations, including workers' rights, after it leaves the bloc and says it is likely to impose trade barriers unless rules remain similar, to avoid what it views as unfair competition.

In the shorter term, Britain's government also needs support from at least some rebel members of the opposition Labor Party to pass Brexit legislation, which has said their votes will hinge on the preservation of workers' existing protections, Reuters reported.

In the Brexit transition deal Prime Minister Boris Johnson has negotiated with Brussels, the political declaration which sets out the framework for trade talks says "the future relationship must ensure open and fair competition, encompassing robust commitments to ensure a level playing field".

According to the FT, Brexit ministry officials wrote that the UK's and EU's "interpretation of these commitments will be very different", and that the text represented a "much more open starting point for future relationship negotiations".

Government ministers rejected the FT's suggestion that this meant British labor standards would diverge significantly from those in the EU.

"This story is not correct. UK will maintain (the) highest standards of workers' rights and environmental standards when we leave the EU," business minister Andrea Leadsom said on Twitter in reply to the FT report.

"These documents confirm our worst fears. Boris Johnson's Brexit is a blueprint for a deregulated economy, which will see vital rights and protections torn up," he said.

Junior business minister Kwasi Kwarteng said it was not in the government's interest to seek to loosen employment rules.

"I think this is completely mad, actually," he said when asked about the FT report by the BBC. "Nineteen Labor MPs have come with us and voted for a second reading (of Brexit legislation). It would not make any sense at all to dilute workers' rights."

Under the Brexit deal negotiated by Johnson's predecessor Theresa May - which parliament rejected three times - the United Kingdom as a whole would have been bound by some "level playing field" commitments as part of a customs agreement.

According to Johnson's deal, only Northern Ireland will be obliged to continue to follow rules similar to those in the EU, and the rest of the UK can diverge if it is willing to accept greater barriers to trade with the EU.

Most economists think preserving trade ties with the EU should be a priority after Brexit, and see few obvious gains from significantly different regulation.