TEHRAN (defapress)- Iranian Ambassador and Deputy Permanent Representative to the United Nations (UN) Eshaq Al-e Habib lashed out at US for providing Israel with unwavering support, saying that Washington’s backings have emboldened Tel Aviv in committing all kinds of crimes against Palestinians.
News ID: 79122 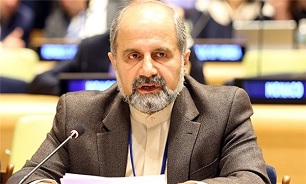 Speaking during a UNSC meeting on the Middle East on Monday, Al-e Habib said that the US “all-out support” has emboldened the regime to step up its crimes against the Palestinian people.

He highlighted Israel’s years-long blockade of the Gaza Strip, slamming the siege as “illegal and inhumane.”

Censuring the UN Security Council’s inaction in the face of Israel’s aggressive policies against Palestinians, Al-e Habib said the 15-member council had passed some 365 resolutions against the Tel Aviv regime, but “none of them has taken effect.”

He said that “the Israeli regime has kept up its brutalities and illegal policies with complete immunity,” and is systematically violating international law, warning that contentious UNSC’s inaction in dealing with Israeli crimes will have “more devastating effects than war.”

The senior diplomat said the regime has waged 15 wars in the Middle East and Africa.

“In addition, the regime continues to pursue its expansionist polices by building settlements” on occupied Palestinian lands, citing Israeli Prime Minister Benjamin Netanyahu’s plan to annex the Jordan Valley in the occupied West Bank as the latest example of such land grab policies.

Al-e Habib also referred to Israel’s proliferation of weapons of mass destruction (WMD), saying the regime “rejects any accession to the relevant treaties and ruthlessly threatens to destroy a regional country with nuclear weapons.”

Israel, which is the sole possessor of nuclear weapons in the Middle East, has a policy of deliberate ambiguity about its nuclear program.

The UNSC’s inaction over Israel’s actions has undermined the credibility of the council and the world body, said the Iranian official, warning that the impacts of such a trend could “be as devastating as or even more devastating than war.”

He further called on the UNSC to shoulder its responsibility and act against the regime’s crimes and threats.

Two weeks ago, Iranian Parliament Speaker Ali Larijani underlined that the Inter-Parliamentary Union (IPU) should herald the Palestinians' grievances about continued occupation of their territories by Israel.

The plight of Palestine has undermined the Muslim World, Larijani said in a meeting with Parliamentary Union of the OIC Member States (PUIC) Secretary General Mouhamed Khouraichi Niass held on the sidelines of the 141st Inter-Parliamentary Union (IPU) Assembly.

Last Monday, Iranian Government Spokesman Ali Rabiyee blasted the Israeli regime for its atrocities against the Palestinians and threatening the security of the Middle East region.

“The Israeli regime is an unwanted and illegitimate element in the region and its viewpoints are not crucial for Iran and the security of the Persian Gulf,” Rabiyee said.

He pointed to the news reports on holding maritime security meeting in Manama under the support of the US and Israel, and said, “How is it possible for those who do not dare to introduce themselves to decide about the Persian Gulf security.”

“We have always declared our position that security in the Persian Gulf will not be possible without regional countries,” Rabiyee added.

The Iranian government spokesman reiterated that Iran cannot be eliminated from security equations of the region.