TEHRAN (defapress) – A ranking IRGC commander said that Washington aims to play down the role of Resistance Axis in fighting terrorism in the region.
News ID: 79126 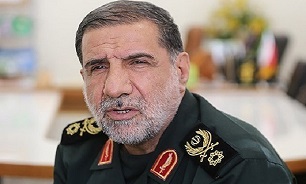 “ISIL has been defeated by regional nations and the Resistance Axis and Americans aim to question the role of Resistance in the fight against terrorism and say that ‘we are the one undermining ISIL and fighting terrorism’, but this is not the case,” Brigadier General Ismail Kowsari, Deputy Commander of IRGC’s Sarollah Base, told Mehr News Agency on Tuesday.

Despite creating an anti-ISIL coalition, Americans didn’t adopt any measure against terrorists and rather, backed these terror groups with all might and the support still continues, he added.

Trump has repeatedly admitted during his presidential election campaign that ISIL was founded by the United States, Kowsari said.

“ISIL was created by Americans and supported by them during the past years; so Americans were well aware of the terror leader’s hiding place,” he added.

“US leaders came to this conclusion that ISIL was of no use for them any longer,” he said adding that they are now mounting propaganda to claim that they are the ones fighting with terrorism.

He noted that al-Baghdadi’s story is very similar to the case of Bin-Laden al-Qaeda, saying US created both and then as soon as their expiration date arrived, made a media buzz and said that they have killed leaders of Takifiri terrorism.