Iran, Iraq Call For Dialogue As Solution to Regional Dialogue

TEHRAN (defapress)- Iranian Ambassador to Baghdad and Head of the National Wisdom Movement of Iraq Ammar Hakim underlined that holding dialogues and peaceful means are only remedies to the ongoing crises in the countries of the region.
News ID: 79134 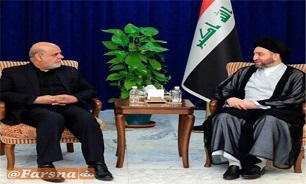 “The regional countries benefit from talks and not conflicts,” Masjedi and Hakim said during their meeting in Baghdad on Tuesday.

“Everyone’s interest is in using the tool of talks and keeping the region away from any conflict that could affect the regional and global security,” Hakim said during the meeting.

The two sides discussed regional developments as well as the situation in Iraq.

In a relevant development on Monday, Iraq’s Islamic Resistance Movement Al-Nujaba denounced Washington’s destructive role in the Arab country, blaming the US for being behind corruption and chaos in the country.

Iraq's Islamic Resistance Movement Al-Nujaba issued a statement on its website blaming the United States for corruption and unrest in the country.

Al-Nujaba urged the Iraqi protesters to comply with the advice of Iraqi Shiite authorities to not allow the Ba'athist and American occupiers to infiltrate peaceful demonstrations.

The statement came as protests escalated in the Iraqi capital Baghdad and other cities.