TEHRAN (defapress)- Syrian President Bashar al-Assad said Thursday that Damascus had no contacts with the United States on the elimination of the Islamic State of Iraq and the Levant (ISIL, ISIS or Daesh) leader Abu Bakr al-Baghdadi and will not believe that he was really killed until reliable evidence is presented.
News ID: 79151 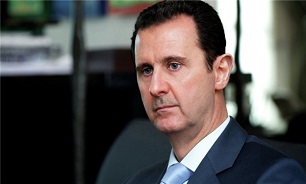 "We had no contact with American authorities on the elimination of al-Baghdadi. More importantly, we do not know whether this operation actually took place or not," Assad stated in an interview with Syrian state-run television channels.

Assad noted that the US had not yet provided any evidence of the elimination of the ISIL leader, and Damascus found out about its "help" to the United States solely from media reports.

Damascus did not participate in the raid by any means, Assad stated, noting that he'd learned about the claim only through media reports.

Adding imaginary participants into the operation is likely supposed to give it credibility, he added, while countries on such a list would likely be flattered to be a “part of a ‘great’ operation”.

"We do not need such credit. We are the ones fighting terrorism. We have no relations and have had no contact with any American institutions," Assad said.

“Why were the remains of Baghdadi not shown? This is the same scenario that was followed with Bin Laden. If they are going to use different pretexts in order not to show the remains, let us recall how [former Iraqi] President Saddam Hussein was captured and how the whole operation was shown from A to Z; they showed pictures and video clips after they captured him,” he stated.

The killing of Saddam’s sons was also well-documented and widely publicized, Assad went on to add, suggesting that the Americans “hide everything” about both the killing of bin Laden and that of al-Baghdadi for a reason.

"This is part of the tricks played by the Americans. That is why we should not believe everything they say unless they come up with evidence. American politicians are actually guilty until proven innocent, not the other way around," he stressed.

The Syrian president emphasized that the death of al-Baghdadi or even all the militants would not affect the general situation while the terrorist ideology is alive.

Assad added that Russia, Iran and Syria were fighting against terrorism jointly and that it was incorrect to talk about Moscow's alleged pressure on Damascus regarding the operation in Idlib.

He noted that the Syrian authorities were in contact with residents of terrorist-controlled territories in Idlib. According to the president, the authorities prefer political options for settlement, as they save the lives of soldiers.

Speaking about the militants in Idlib, Assad emphasised that they have only two ways if they do not leave for Turkey. The first way is to lay down arms and go through the rehabilitation process under the reconciliation program, the second option is war.

As for Russia-Turkey agreement on Northeastern Syria, Assad said that it is based on today's realities and these are temporary in nature.

"Russia proceeds from the sovereignty of Syria and the integrity of its territories, and this policy has not changed, but at the same time, Russia's policy is connected with modern realities. The Russian-Turkish treaty is temporary and not permanent. And we must distinguish final and strategic goals from tactics," he added.

In his interview, the Syrian president touched upon US President Donald Trump as well, sarcastically characterising him as the best leader in the country's history due to his blunt approach to policy.

"He is the best bot because if good policies, but because he is the most transparent, he talks straight 'we need oil', 'we want to get rid of someone', 'we want to exchange favors for money'. Such is the United States policy. What can be better than an honest enemy?" Assad stressed.

He went on to call all US presidents "criminals", who, nevertheless, occasionally receive the Nobel Peace Prize while in reality serving interests of lobbying groups.

Earlier in the month, Assad called for the complete withdrawal of foreign forces from Northeastern Syria where Turkish troops have conducted an operation against local Kurdish militants.

Assad has been fighting against different militant groups, often backed by Washington, in a devastating war since 2011. The Syrian government has regained control over most of the territories that were seized by the ISIL, however counterterrorist operations still continue in a number of areas.