US Power Waning since Victory of Islamic Revolution 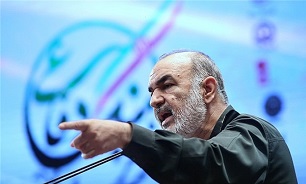 Addressing a ceremony at the former US embassy in Tehran, known in Iran as "the den of espionage", this morning, Major General Salami said Washington’s self-proclaimed war against terrorism is in stark contrast with what US President Donald Trump's statement about Barak Obama's role in founding ISIL.

“Are not these the main signifiers of the US identity in the world that has displaced the Syrian nation, bombarded the [al-Shifa] pharmaceutical factory in Sudan and downed an Iranian passenger plane with 290 [civilians] on board?” the commander added.

The al-Shifa pharmaceutical factory was destroyed in 1998 by a missile attack launched by the US government, killing one employee and wounding 11. Washington claimed that the factory was used for the processing of VX nerve agent, however, it prevented the United Nations Security Council from conducting an investigation of the site to determine if it had been used to produce chemical weapons or precursors.

On 3 July 1988, the USS Vincennes, fired an SM-2MR surface-to-air missile guided missile cruiser of the United States Navy, targeting Iran Air Flight 655, a scheduled passenger flight from Tehran to Dubai via Bandar Abbas with 290 civilians on board.

“After the victory of the Islamic Revolution, the US has got into a track of power erosion as it has been relegated from strategic levels to an operational level,” Major General Salami underlined.

“Americans have set vital interest targets for themselves in all four corners of the world. However, growing awareness of the nations and their uprisings that are not bound to geographical borders against them [the Americans] have forced [the US] to expand its military power more than ever,” the IRGC chief highlighted.

“It has been years that Americans cannot find a balance between their [military] measures’ expenditure and their accomplishments, even in the field of economy. They are in a downward spiral and it has been for decades and years that the world has not witnessed them posting a political victory,” he asserted.

The Iranian commander then reminded that the US military interventions in the world have claimed the lives of more than 8.5 million people, reiterating that the White House has never cared about people's lives and human rights.

“While, Americans claim to be fighting against the spread of weapons of mass destruction, they are the first regime [in the world] which has used nuclear weapons,” Major General Salami noted.

On August 6, 1945, during World War II (1939-45), an American B-29 bomber dropped the world's first deployed atomic bomb over the Japanese city of Hiroshima. The explosion wiped out 90 percent of the city and immediately killed 80,000 people; tens of thousands more would later die of radiation exposure. Three days later, a second B-29 dropped another A-bomb on Nagasaki, killing an estimated 40,000 people.

This August, Iranian Foreign Minister Mohammad Javad Zarif marked the anniversary of the nuclear bombing of Japan’s Hiroshima, adding that the United States’ legacy of targeting civilians lives on 74 years after it became the only country to ever drop a nuclear bomb.

Elsewhere in his remarks, Salami highlighted that the US self-proclaimed advocacy of human rights is a self-contradicted claim as Washington is involved in human rights violation cases in all over the world.

He added that all torture devices and machines owned by oppressive regimes across the world are made and manufactured in the US.

Late in December 2018, former IRGC Commander Major General Mohammad Ali Jafari said that Tehran is now so powerful that Washington does not dare to mention the military option against the country anymore, which demonstrates Iran’s rise in the face of the US’ decline.

“When we compare the US power now with 40 years ago, we see that as put by the Leader (of the Islamic Revolution Ayatollah Seyed Ali Khamenei) America is on the decline and today, they themselves confess to their weakness in the face of Iran. Iran is now so powerful that they do not dare mention the military option against Iran anymore,” the former IRGC chief added.

Late in June, s prominent Syrian dissident analyst underlined that Iran's downing of a US spy drone near the Strait of Hormuz showed that Washington's power has decreased and will sustain a heavy damage in any possible war against Tehran.

"What happened over the Strait of Hormuz's sky was not theatrical but it displayed the decline of the US power," Ayad al-Ja'afari wrote in the Arabic-language Geiroon news website close to the Syrian dissidents on June 29.

Last November, Top Military Aide to the Iranian Supreme Leader Major General Yahya Rahim Safavi asserted that the US' power is fading away and Washington is unable to win control over Iranians’ economy and fate.

"According to documents found in the US embassy in Tehran, from the 1953 Coup to the overthrow of Mohammad Reza Pahlavi in 1979 all the affairs of Iran were in hand of the United States," he highlighted.

"In the past 40 years, the US has staged all-out effort to fight Iran but they have conceded a defeat and are forced to retreat from the western Asian region," Safavi added.

He went on to say that with the formation of the Resistance Axis and the guidance of Islamic Revolution Leader and late Imam Khomeini, nations take control of their own fate.