TEHRAN (defapress) – A man was charged for violently punching and stomping on a heavily pregnant Muslim woman in an Islamophobic attack in Australia.
News ID: 79329 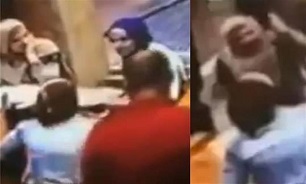 The pregnant 31-year-old Muslim woman wearing a headscarf was injured in the Islamophobic attack in Sydney.

Rana Elasmar, was punched and kicked by 43-year-old resident Stipe Lozina, while she was sitting in a cafe with her friends, who were also wearing headscarves, New South Wales Police department said on Thursday, Anadolu reported.

Lozina used racist slurs at the victim and was remanded into custody.

"After making a comment about Muslims, you approached and punched her in the head 14 times. I will consider this as a very strong case against you," Chief Judge Tim Keady said.

"It is terrible to attack a pregnant woman sitting quietly with her friends. This was clearly a racist and Islamophobic attack and we expect it to be treated as such," said Rateb Jneid, the head of AFIC.

Elasmar was discharged from the hospital after treatment.