US Not Reliable Partner for Persian Gulf Coalition

TEHRAN (defapress)- Secretary of Iran's Supreme National Security Council (SNSC) Ali Shamkhani in a meeting with Omani Foreign Minister Yusuf bin Alawi in Tehran on Monday warned that the US cannot be a reliable partner for the formation of a coalition to protect security in the Persian Gulf.
News ID: 79458 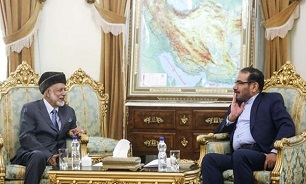 "The only coalition which is practical in the region and can bring stable security is the one acting without foreigners’ interference," Shamkhani said.

"The country (the US), that has not fulfilled any of its commitments, neither in its interactions with Iran nor with other countries, is not reliable," he added.

"Those countries with the most significant role in sowing tensions, spreading terrorism, and igniting wars in the region, have never sought peace in the Persian Gulf and are only looking for their own interests," Shamkhani said.

Elsewhere, he referred to the ongoing war in Yemen, and said, "Continuation of this genocide is only in favor of the enemies of the region, including the US and the Israeli regime, and Saudi Arabia should surrender to the demand of the Yemeni nation and not to put the regional peace at further risk."

Bin Alawi, for his part, expressed content about mutual negotiations with Iran about regional and international issues, stressing that none of the Persian Gulf States would benefit from regional tensions.

He added that regarding the warm relations between Tehran and Muscat, the two sides’ tradespersons have the chance to remarkably improve mutual ties.

Bin Alawi also stressed his country’s readiness for alleviating the regional unrest via setting proper grounds for holding talks among the regional countries.

In relevant remarks last month, Iran had warned that the US-led naval coalition which officially launched operations in Bahrain would further exacerbate the security conditions in the region, calling on neighbors to rely on their own power.

"History shows that the US-led coalitions have always been nothing but unfit names that have not contributed to security so far and further fomented more insecurity and instability in different parts of the world," Foreign Ministry Spokesman Seyed Abbas Mousavi said.

He said the US misuses other countries' name to legitimize its unilateral presence, and noted that the US leadership of a naval coalition in the Persian Gulf indicates Washington's weakness and lack of international legitimacy.

Mousavi called on the regional states to rely on their own and their neighbors' capacities to establish sustainable and all-out security in the region.

"The Islamic Republic of Iran as a country with lengthiest coastline in the Persian Gulf will continue safeguarding its economic and security interests, including the security and safety of shipping, with maximum power," he added.

Iranian Defense Minister Brigadier General Amir Hatami had also in August warned that the military coalition that the US was attempting to form in the Persian Gulf would undermine regional security.

"The military coalition that the US is after under the pretext of protecting security of shipping will increase insecurity in the region," General Hatami said in separate phone talks with his Qatari, Omani and Kuwaiti counterparts.

During the phone conversations, he discussed the latest developments in the region, specially the US provocative moves regarding the Persian Gulf security.

General Hatami also highlighted Iran’s continued efforts to maintain peace and security all over the Persian Gulf, the Sea of Oman and the Strait of Hormuz.

He stressed that the region’s security should be provided by the regional states, calling for a constructive dialogue among the neighboring countries to boost their cooperation regarding the matter.

Noting that the trans-regional powers have been busy for decades with creating rifts among the neighboring countries, General Hatami reiterated that the US so-called coalition, just like its other measures, would bear no result but increasing the tensions in the region.