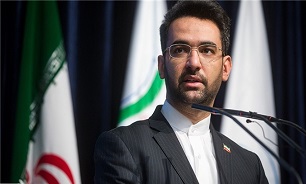 Azari Jahromi made the remarks in a meeting with the Head of Azerbaijan Space Agency Reshad Nabiyev on the sidelines of International Exhibition Bakutel 2019 on Wednesday.

He said that Iran is ready for cooperation with Baku on space technology and launching satellites with multiple objectives in addition to the economic incentives.

"The lion's share of future's economy depends on the domain of space and we define our status in the market," Azari Jahromi said.

He noted that Iran welcomes cooperation in the field of space technology, and said that Iran's Space Organization is ready for preparing the ground for joint projects with Azerbaijan's Space Agency.

Nabiyev, for his part, expressed pleasure with Iran's willingness for cooperation and Azerbaijan also welcomed cooperation in the field.

He also said that he is prepared to host head of Iran's Space Organization for professional negotiations in the near future.

Iran is one of the 9 states building satellites beside the US, Russia, Europe and Canada.

Iran in February 2017 unveiled two new home-made satellites of Nahid 1 and Amir Kabir as well as a space tug built for the first time in the country.

The three space crafts were unveiled in a ceremony participated by Iranian President Hassan Rouhani in Tehran on the occasion of the Space Technology Day in Iran.

Nahid 1 is a telecommunication satellite built in the Iranian Space Research Center.

Payam-e Amir Kabir has been designed and built in Amir Kabir University of Technology and is capable of taking images with a precision better than 40 meters.

Meantime, Saman 1 space tug which has been manufactured for the first time in the country is used to transfer the satellites from Low Earth orbit (LEO) to higher-energy orbits.

Iran has previously sent Simorgh satellite and Pajouhesh explorer into the orbit in recent years.