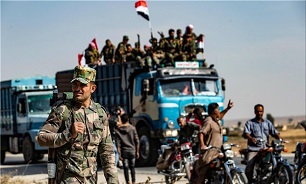 A Syrian military source told the Arabic-language service of Sputnik news agency that three other villages have been freed from the terrorists in the Eastern and Southeastern parts of the town of Ma'arat al-No'eman in Idlib.

"Seyedi Ali and Ja'afar regions and the two towns of Fa'aloul and Kharbat Ma'arat in Eastern Idlib were recaptured by the Syrian army on Monday," the source said.

Meantime, reports from Southern Idlib said that militants have blocked efforts to open a safe corridor for the evacuation of civilians in Southern Idlib in a move to take people hostage and use them as a shield against army attacks as Ma'arat al-No'eman, one of the terrorists' main strongholds in the region, could fall to the government troops fast.

"Certain measures are underway to deliver control of Ma'arat al-No'eman and nearby villages in Southern Idlib to the Syrian army without any clashes through contacts with influential local figures in the region," Member of Syria's National Reconciliation Committee Omar Rahmoun told the Arabic-language al-Watan newspaper on Monday.

Also, Deputy Governor-General of Idlib province Mohammed Fadi al-Sa'adoun described the Syrian army's achievements in Southeastern Idlib in the past 24 hours as great, and said, "The terrorist groups are doing their utmost efforts to block evacuation of the civilian population to the regions controlled by the Syrian government through a safe passageway and people are, hence, forced to go round Manbij to flee the region."

He added that the Syrian army is now just 8km away from Ma'arat al-No'eman.

In a relevant development on Sunday, the Syrian army units reestablished control over the strategic town of al-Tehh in the Southeastern countryside of Idlib following clashes.

The army units established control over al-Tehh which is one of the most prominent strongholds of terrorists in the Eastern parts of the international highway, following violent battles during which the army killed many terrorists and destroyed their military vehicles and armaments.