TEHRAN (defapress) – After conclusion of a joint naval war game of Iran, Russia and China, a ranking Iranian military commander said the Islamic Republic will continue to stage joint military exercises with other countries in the coming years.
News ID: 79729 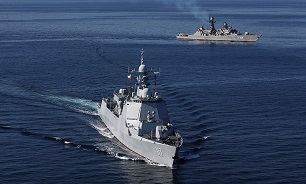 Commander of the Naval Operations Department of the General Staff of the Iranian Armed Forces General Mohammad Ebrahim Dehqani said on Sunday that joint military drills will definitely continue in the coming years.

According to the commander, the joint exercises in future will include other regional countries as well.

He also stressed that the naval exercise of Iran, Russia and China has given the enemies a clear message that any mistake would draw a crushing response from the Iranian Armed Forces.

“Our friends receive an assurance that the region’s maritime security would be ensured by the Islamic Republic of Iran and its allies, and there is no need for alien forces in the region, particularly the Americans,” he said.

Denouncing the presence of American forces as a main factor behind regional insecurity, Dehqani said the US decision to transfer its military forces from the Persian Gulf and the Sea of Oman to the northern parts of the Indian Ocean reveals that “Americans are even incapable of ensuring their own security.”

Iranian, Russian, and Chinese naval units on Sunday wrapped up the joint exercise after three days.

On the final day of the joint drill, the naval forces of the three countries exercised tactics to fight piracy and extinguish vessel fires in the international waters south of Iran.

The war game came amid US efforts to woo countries into a maritime coalition for patrols in the Persian Gulf, which have received lukewarm welcome from its allies.