TEHRAN (defapress) – A gunman opened fire at a church in Texas on Sunday morning, killing two people with a shotgun before a member of the church’s volunteer security team fatally shot him, the authorities said.
News ID: 79730 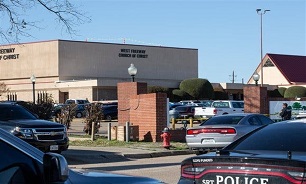 About 250 people were inside the auditorium of the West Freeway Church of Christ in White Settlement, near Fort Worth, when the gunman began shooting just before communion, said Jack Cummings, a minister at the church.

Cummings said the gunman was “acting suspiciously” before the shooting and drew the attention of the church’s security team. The team, he said, has existed for at least 10 years and is made up of members of the church’s congregation who are licensed to carry firearms and practice shooting regularly, The New York Times reported.

“They saved a lot of lives today,” Cummings said. “Because this thing would have been a massacre otherwise.”

A member of the security team was killed in the attack, he said.

Mike Tinius, an elder at the church, said he had known that victim for more than 20 years. “He was trying to do what he needed to do to protect the rest of us,” Tinius said, adding, “It’s extremely upsetting to see anyone committing violence.”

The shooting, which the authorities said lasted six seconds, was captured on video because the church regularly posts its services online.

In the video, the gunman stands up during a quiet moment and briefly talks with someone standing against a wall. He then begins firing. Congregants crouch down in their pews. After a third loud bang, the gunman slumps to the ground as people scream.

“He was immediately hit by one of our marksmen,” Cummings said. “The next thing I know, he was lying on the floor.”

The authorities did not release the names of the two parishioners who had been killed or the gunman, whom the FBI special agent in charge of Dallas described as a transient person with roots in the area. The agent, Matthew J. DeSarno, said the investigation into a motive was continuing.

The gunman had a previous arrest record but was not on a watch list, said DeSarno, who declined to elaborate on the nature of the arrests. It was not clear whether there was a connection between the gunman and the church or if the church had been targeted.

With a row of law enforcement officers and the lieutenant governor of Texas behind him at an evening news conference, Britt Farmer, the church’s senior minister, indirectly expressed support for the Second Amendment.

“We lost two great men today,” he said. “It could have been a lot worse. I’m thankful that our government has allowed us the opportunity to protect ourselves.”

A Texas bill that took effect in September allows licensed handgun owners to carry those weapons in churches, synagogues and other places of worship.

Cummings said the church had added a security team because of “the fact that people go into schools and shoot people.”

“We got a history in this nation of people doing this,” he said.

Houses of worship have been attacked several times in recent years, including shootings at synagogues in Poway, Calif., and Pittsburgh. On Saturday night in Monsey, NY, a man with a large knife burst into the home of a Hasidic rabbi, stabbing and wounding five people who were celebrating Hanukkah.

Texas churches have also experienced such violence. In 1999, a gunman killed seven people and himself at a Baptist church in Fort Worth. And in 2017, a gunman with a ballistic vest strapped to his chest and a military-style rifle in his hands opened fire at a small Baptist church in Sutherland Springs, killing 26 people.

“Places of worship are meant to be sacred, and I am grateful for the church members who acted quickly to take down the shooter and help prevent further loss of life,” Gov. Greg Abbott of Texas said in a statement about Sunday’s shooting.

When the police received reports of shots fired, off-duty officers down the street quickly responded and found an active shooting scene, said Mike Drivdahl, a spokesman for the Fort Worth Fire Department.

Hours after the attack, police cars surrounded the church while a helicopter hovered overhead and onlookers leaned over yellow police tape at a nearby Waffle House. Officers brought in packages of bottled water as federal agents huddled in conversation. The Salvation Army gave out coffee from a truck.

John Richardson, a congregant, said he had put his wife, who uses a wheelchair, on the ground and got on top of her after hearing the initial gunfire. When he looked up, several members of church security had their guns drawn.

“My heart goes out to his family,” he said of the gunman, adding, “I don’t have any hate for this person.”

Last week at the church, congregants filled the wooden pews and sang together, according to a video of the service. Children ran to the stage to talk about why they were excited for Christmas, and a minister spoke about the benefits of pruning parts of life that no longer bear fruit.

The church concluded that service on a note of accepting and giving love to others.

Its next Sunday service ended in gunfire.

“We like to say we’re a place your family can call home,” said Farmer, the senior minister. “Today our home was invaded by evil.”