Iran to give quick, crushing response to enemies’ slightest threats

TEHRAN (defapress) – The chief commander of Iran's Army says the country will give a crushing response to any threat posed by enemies at any level.
News ID: 79759 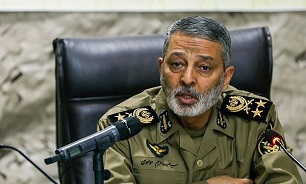 “In case of any threat posed against the country, the Army divisions will, undoubtedly, be the first units to give the proper response to the enemies,” Major General Abdolrahim Mousavi said on Thursday, during an inspection to the Army’s tactical exercises in the southern province of Fars.

He described the Iranian Army’s capacities as “promising” in the battle against any external threats, saying the Ground Force has made all necessary preparations for powerful protection of the country's borders, and its personnel are ready to embark on a multitude of tasks in different battlegrounds.

Major General Mousavi underlined that all weapons and equipment used by the Islamic Republic’s Army are made by the Iranian experts, saying, “The weaponry and equipment used in this exercise boasted the Army’s self-sufficiency in the defensive field.”