TEHRAN (defapress) – The Deputy Chief of Staff of the Armed Forces of the Islamic Republic of Iran Brigadier-General Mohammad-Reza Ashtiani said that Iran’s missile attack on US military bases in Iraq showed the fake grandeur of the United States in the international arena.
News ID: 79854 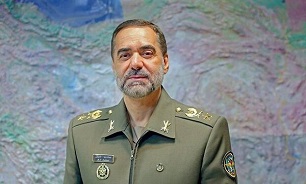 samaneh moslemi/ He made the remarks Thu. on the sidelines of his visit to an exhibition of “Resistance”, held at the initiative taken by the Foundation for the Preservation of Sacred Defense Works and Values, and said, “under the wise leadership of the Islamic Revolution, once again Islamic Republic of Iran showed its grandeur to the world and did such a great thing that no other powers dare to do such a great task before.”

Today, Islamic Republic of Iran owes its power and authority in the international arena to the bravery of great men such as martyr Lt. Gen. Qasem Soleimani who stood against the global arrogance and in the fight against ISIL terrorist groups with his utmost power, he highlighted.

Relying upon the assistance of the Almighty God, Islamic Republic of Iran continues its path of resistance strongly and “we believe that these victories will continue and the country will move forwards in all scenes with the power of faith.”