TEHRAN (defapress)- Secretary of Iran's Supreme National Security Council (SNSC) Ali Shamkhani underlined that Tehran has been dealing with the accidental downing of the Ukrainian passenger plane with total honesty, asserting that there were no efforts underway to cover up the real reason of the unfortunate accident.
News ID: 79888 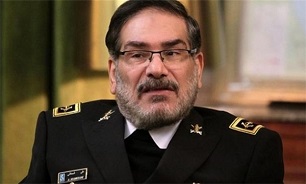 While attending a mourning ceremony for two of the plane incident victims on Sunday, Shamkhani said no effort was made to cover up the reasons behind the crash of a Ukrainian plane in Southwest Tehran, emphasizing that covering up such incident was impossible in view of its nature and characteristics.

He noted that the Armed Forces of the Islamic Republic of Iran has been the main party to mourn over this bitter incident.

“There was no intention to cover up the reasons behind this incident from the very beginning, taking into account that such a cover-up was actually impossible in view of the nature and technical characteristics of the crash,” Shamkhani said.

“The announcement of the real cause of the Ukrainian plane crash took some time due to the necessity of examining all the possible theories, including ‘possible enemy actions in jamming’, ‘hacking of systems’, ‘infiltration [of enemy agents]’, and other related factors,” Shamkhani added.

“From the earliest hours after the plane crash, the Islamic Republic of Iran invited experts from the concerned countries to conduct unrestricted investigation, which is a sign of our goodwill gesture to closely follow up on the cause of the crash and announce the results of the investigations,” the secretary of the SNSC further said.

In conclusion, Shamkhani stressed, "It must be noted that proving any of the factors that led to firing of the missile [at the Ukrainian plane] could completely change the way that the public was informed about the incident as well as the country’s response to it.”

Iran has vowed full cooperation with countries whose nationals lost their lives in the crash, particularly Canada which had 63 citizens on board the plane.

Furthermore, Iranian authorities have promised a thorough investigation into the incident and vowed that all those responsible for the tragedy will be held into account.

Early on Saturday, the General Staff of the Iranian Armed Forces said in a statement that Ukrainian Boeing 737 Plane has been shot down as a hostile object due to human error at a time of heightened US threats of war.