TEHRAN (defapress) – A senior Iranian anti-narcotics official has traveled to China to explore ways of enhancing cooperation between the two countries in the war on illicit drugs.
News ID: 79898 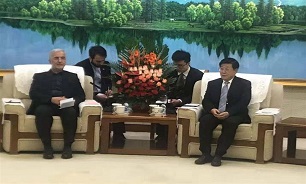 Secretary-General of Iran’s Anti-Narcotics Headquarters Brigadier General Eskandar Momeni arrived in China on Monday at the invitation of the Chinese minister of Public Security.

Speaking to reporters, the Iranian general said he sought to promote cooperation between Tehran and Beijing in various fields of the fight against narcotics.

“The two countries share views on the war on narcotics, and such common views have prepared the ground for close cooperation,” Momeni said, adding that he would discuss various plans with the Chinese officials to share experiences in the war on illicit drugs.

During a visit to China, Iranian President Hassan Rouhani signed a memorandum of understanding on the fight against narcotics, the general said, noting that he will be pursuing efforts to implement the agreement.

“In this visit, we will strengthen cooperation between the two countries in various fields of the war on drugs, such as countering, treatment, mitigating damages, and prevention at the level of regional and international diplomacy,” Momeni stated.

In November 2019, Iran’s minister of interior and China’s ambassador to Tehran discussed plans for cooperation between the police forces of the two countries and the fight against terrorism and narcotics.

Momeni had announced in June 2019 that despite the US sanctions’ negative impact on Iran’s campaign on illicit drugs, the country captures 800 tons of narcotics each year.