TEHRAN (defapress) – At least three grenade explosions rocked the district of Dibrugarh and another in Charaideo district in Assam, in northeastern India, during the Republic Holiday.
News ID: 80007 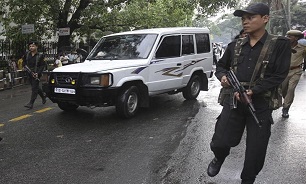 The police have stated that at the moment there are no casualties.

The news comes after almost 650 militants from eight rebel factions in northeastern India earlier this week surrendered along with their arms in Guwahati, the capital city of Assam.

"There have been four low-intensity IED blasts in Upper Assam. There has been no casualties or damage to property. We would leave no stone unturned to neutralize the perpetrators. That's our solemn assurance to people", Inspector General GP Singh stated, Sputnik reported.

India Today also reported there was a fifth blast in Tinsukia district, adding witnesses saw a perpetrator on a bike throw a grenade who subsequently fled the scene.

The chief minister of Assam has commented on the explosions, condemning the attackers.

No organization has claimed responsibility for the incidents at the moment.

Republic Day, which falls on January 26, celebrates the date the Indian Constitution took effect after the country proclaimed independence 71 years ago.