TEHRAN (defapress) – Speaker of the Iranian Parliament Ali Larijani called on the parliaments of Muslim countries to stand against the US-proposed “fake” deal of the century by endorsing a plan for a referendum on the issue of Palestine.
News ID: 80046 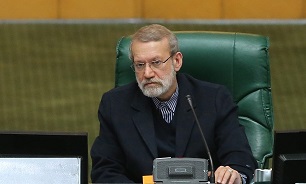 Larijani on Wednesday sent letters to his counterparts in the Muslim countries to condemn the so-called deal of the century that US President Donald Trump has unveiled in Washington.

The Iranian speaker said the American plan for the Middle East has violated the whole international agreements, laws and resolutions, the UN Charter, and the resolutions passed by the Arab League and the Organization of Islamic Cooperation for the settlement of the Palestinian crisis.

Describing the issue of Palestine as the Islamic world’s top priority, Larijani said the Muslim nations will oppose any violation of Palestine’s sovereignty, stand against the continued occupation of Palestine whose capital is al-Quds, and will reject any one-sided plan imposed on the Palestinians.

“Without referring to the international organizations, such as the United Nations, or consultation with the Palestinian sides, the US president is trying to portray the occupation of a land of the Islamic Ummah as being official only on the basis of the personal, partisan and Zionist interests and by resorting to force,” the Iranian speaker deplored, saying Trump has confiscated the inalienable rights of Palestinians in favor of a Zionist group.

“By registering a democratic and political plan at the UN for holding a referendum in the occupied territories with the participation of its main inhabitants, the Islamic Republic of Iran holds that the way out of the current crisis and the fair resolution of the issue of Palestine is the right of the oppressed and defenseless Palestinian nation,” the speaker noted.

Larijani finally called on the parliament speakers of the Muslim countries to join hands to confront the “fake” deal of the century, support the plan for a referendum, and employ the parliamentary diplomacy capacities to help resolve the Palestinian crisis.

On Tuesday night, US President Donald Trump unveiled his long-delayed Middle East plan, a proposal Palestinian leaders called a "conspiracy" that "will not pass".