Arab Envoys Present at US Mideast Plan Unveiling Were Misled

TEHRAN (defapress)- An Arab diplomat stated that ambassadors from the UAE, Bahrain and Oman who attended the unveiling ceremony of a contentious Washington-devised Middle East proposal were not briefed on the details of the scheme.
News ID: 80091 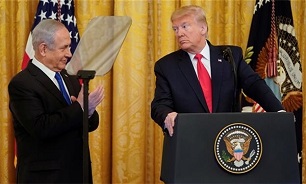 The unnamed diplomat told Haaretz newspaper on Saturday that the United States did not disclose the full details of its so-called peace plan to the three Persian Gulf Arab states ahead of its release, but only presented them with a vague outline of the initiative.

President Donald Trump unveiled his self-proclaimed "Deal of the Century" during an event at the White House alongside Israeli Prime Minister Netanyahu on Tuesday.

The only Arab ambassadors present were from the UAE, Bahrain and Oman — all members of the Arab League that are also among Washington’s closest allies in the region.

The diplomat noted that the White House had urged those Arab countries to attend the event, sending them a document of general statements about “a Palestinian state and a capital" in East Jerusalem al-Quds.

However, he added, “When they got into the minute details of the plan, we understood that there is no Palestinian state in practice and there is no capital in East al-Quds, and more importantly, that there is an attempt to divide al-Aqsa Mosque."

The Arab diplomat said the disappointment with the details of the US plan led the three Persian Gulf countries to join the other Arab League member states in voting to reject the US scheme.

“These are clauses that no Arab or Islamic countries can agree to,” he noted, stating, “and so ultimately all the foreign ministers fell in line with the position opposing the Trump plan.”

In a statement on Saturday, the Arab League announced it "rejects the US-Israeli 'Deal of the Century', considering that it does not meet the minimum rights and aspirations of Palestinian people.

The 22-member pan-Arab body further agreed "not to ... cooperate with the US administration to implement this plan", insisting on a solution that includes a Palestinian state based on  the 1967 boundaries, with East Jerusalem al-Quds as its capital.

All Palestinian groups have unanimously rejected Trump's initiative that largely meets Israel’s demands in the decades-old conflict while creating a Palestinian state with limited control over its own security and borders.

It enshrines Jerusalem al-Quds as “Israel’s undivided capital” and allows the regime to annex settlements in the occupied West Bank and the Jordan Valley.

The plan also denies the right of return of Palestinian refugees into their homeland, among other controversial terms.