TEHRAN (defapress) – Iranian Ambassador to Oman Mohammad Reza Nouri-Shahroudi described terrorism as the main problem of the Middle East and said the Islamic Republic is playing a leading role in combatting the phenomenon.
News ID: 80326 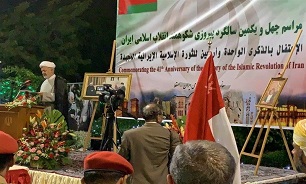 Addressing a ceremony in the Omani capital of Oman on Sunday, Nouri-Shahroudi said the scourge of terrorism is one of the main problems of the region.

“In the fight against terrorism, the Islamic Republic of Iran has also lost one of its main commanders recently,” he said, adding that Lt. Gen. Qassem Soleimani was assassinated by “the terrorist government” of the US.

Elsewhere in his remarks, the envoy hailed the bilateral relations between Iran and Oman as strong and said the ties between the two countries, which are based on friendship and mutual trust, are growing in all areas as they have progressed from one stage to another throughout history.

He went on to say that Iran and Oman have for years been pursuing common international goals for a world ruled by peace, justice and respect under the UN Charter.

Earlier this month, Oman’s foreign minister said Muscat is in talks with Tehran and Washington to reduce tensions in the Persian Gulf as it sees prospects of talks between the two countries.

Tensions have been running high between Tehran and Washington since 2018, when President Donald Trump unilaterally withdrew the US from the 2015 multilateral nuclear deal, officially known as the Joint Comprehensive Plan of Action (JCPOA), and unleashed the “toughest ever” sanctions against the Islamic Republic.

Iran has ruled out talks with the US unless Washington returns to the nuclear deal and ends the sanctions.