TEHRAN (defapress) - Iran’s Foreign Ministry spokesman hit back at Mike Pompeo for claiming that “Iranian diplomats” were behind an alleged “assassination” in Turkey, noting that the undisputed fact is that US diplomats have long been involved in the business of coup and terrorism.
News ID: 80714 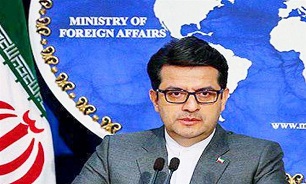 "Undisputed fact: US "diplomats" have long been in the business of coups, arming terrorists, fueling sectarian violence, supporting narcotics cartels, bullying governments & companies, spying on even US allies, flirting with dictators, butchers and terrorists, etc…," Abbas Mousavi said in a message posted on his Twitter account late on Saturday.

The US secretary of state, who is a former CIA agent and also known as secretary of hate, and his masters have taken the "job" to a whole new level that is called "medical terrorism”, he added in a follow-up tweet.

"That's why he has a conscience so filled with guilt that resorts to such psychological projection," the Iranian spokesperson added.

On Thursday, Pompeo in a tweet leveled new allegations against Tehran, accusing Iranian diplomats of being behind an assassination in Turkey.

The claims came amid global pressures on the White House to lift its illegal sanctions against Tehran as the country continues its battle to stop the outbreak of the deadly novel coronavirus.

Iran’s ambassador to the United Nations also reacted to the claims and said no one will be fooled by Washington's efforts to spread disinformation about Tehran and the country’s diplomats.

“The US administration’s Iran-bashing is limitless. While the world focusses on cooperation to defeat #COVID19—and calls on US to lift its #economicterrorism— @SecPompeo disregards this and instead spreads disinformation: this time against Iranian diplomats. No one is fooled,” Majid Takht Ravanchi said on Thursday.