TEHRAN (defapress)- Iranian President Hassan Rouhani praised the strenuous efforts made by the country’s Armed Forces in fight against the coronavirus epidemic and helping the health ministry in the treatment of patients.
News ID: 80814 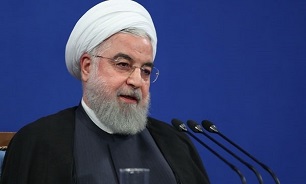 “I should appreciate and praise the Islamic Republic of Iran’s Army and other Armed Forces,” Rouhani said, addressing a cabinet meeting in Tehran on Wednesday.

“They showed that the Army is needed both for peace and war and we certainly need them for war and deterrence,” he added.

Rouhani underlined the effective presence of the Iranian Armed Forces on all scenes when people face a problem due to flood, earthquake and fighting against coronavirus, and said, “I thank the Army, the Islamic Revolution Guards Corps (IRGC), Basij (volunteer forces), the Law Enforcement Police and all people who have made efforts in these days to confront coronavirus.”

Commander of the Iranian Ground Force Brigadier General Kiomars Heidari underlined on Tuesday that the spread of coronavirus has not left any negative impacts on his forces’ combat power, saying that new military equipment will be unveiled on the occasion of Army Day in Iran (April 17).

“We had adopted measures in order for our assistance to people (during the coronavirus epidemic) not to leave any impact on our combat power because we already had formed units special to such conditions, including the modern war units,” General Heidari said in a press conference.

Elsewhere, he said that although the Army Day parades have been cancelled across Iran due to the coronavirus epidemic, the Ground Force will unveil new equipment, including tools to diagnose and confront coronavirus, and military equipment like Kian-500, Kian-600 and Kian-700 vehicles and anti-armor missiles.

The Iranian Armed Forces have been actively involved in anti-coronavirus activities across the country.

General Heidari announced last month that the military body would use three types of home-made vehicles to disinfect and sanitize public places in big cities across the country to further contribute to the national campaign against the new coronavirus outbreak.

He said that three types of new domestic vehicles have been designed and produced and will be used for disinfecting public places.

Also, late in March, the Iranian Army launched a medical center with 2,000 beds at Tehran International Permanent Fairground special to the coronavirus patients who are recovering from the deadly disease.

Addressing the ceremony, General Heidari said that the Army has launched 27 hospitals and 4,750 hospital beds across the country so far, stressing readiness to prepare 8,000 others.

Also, Rear Admiral Sayyari said that the Army is well-prepared to thwart any threat thanks to combat capability.

The Iranian health ministry announced on Tuesday that 98 Coronavirus patients have died in the country in the last one day after a month that the country was losing over a hundred patients each day.

“1,574 more patients infected with COVID-19 virus have been identified in the country since yesterday based on confirmed diagnosis criteria,” Jahanpour said on Tuesday.

He said that the total number of coronavirus patients in Iran has increased to 74,877, adding that 4,683 people have lost their lives due to infection to the virus, including 98 in the past 24 hours.

Jahanpour, meantime, said that 48,129 infected people have been treated and dismissed from hospital, adding that the recovery of patients has sped up in Iran.

He noted that 287,359 coronavirus diagnosis tests have been carried out in the country so far, expressing concern that 3,691 patients infected with COVID-19 virus are in critical conditions.

The coronavirus COVID-19 is affecting approximately all countries and territories around the world. The virus was first reported in the central Chinese city of Wuhan late last year. It has so far killed more than 126,700 people and infected over 2 million others globally.