TEHRAN (defapress)- President Hassan Rouhani underlined the Iranian Armed Forces’ vigilant eyes in monitoring the US moves in the region, although he reiterated that his country never initiates tensions.
News ID: 80922 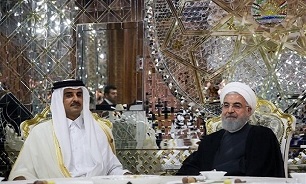 “The Islamic Republic of Iran precisely monitors and pursues the Americans’ activities and moves but will never start any clashes and tensions in the region,” President Rouhani said in a phone conversation with Qatari Emir Sheikh Tamim bin Hamad al-Thani on Saturday.

During the conversation, the two high-ranking officials described Iran-Qatar relations as positive and growing, stressing the need for strengthening and consolidation of ties in all fields.

They also felicitated the start of the holy month of Ramadan to each other and both Muslim nations.

Rouhani’s remarks came after the US provocative acts in the Persian Gulf in recent weeks.

Commander of the Islamic Revolution Guards Corps (IRGC) Major General Hossein Salami warned the US forces against any act of sabotage to threatening move in the Persian Gulf, after US President Donald Trump’s provocative remarks.