TEHRAN (defapress)- Iranian Judiciary Chief Ayatollah Seyed Ebrahim Rayeesi said on Monday that it is natural for US and European countries to heap up accusations against Iran as they oppose the country's growth and progress.
News ID: 80938 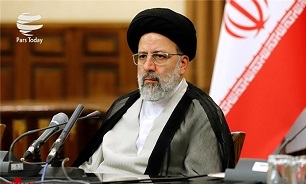 “Today, they are against what IRGC did to make Iran stronger, and this is natural,” Rayeesi stressed.

He strongly ruled out US and some European countries’ accusations that the recent Noor-1 satellite launch was in breach of UN Security Council Resolution 2231.

“We should not pay attention to this ballyhoo, rather we should continue the course with more power,” he said.

Meanwhile, Iranian Foreign Ministry Spokesman Seyed Abbas Mousavi said on Thursday April 23 that advancing in science and technology, especially in the field of aerospace, is Iran’s legal right, emphasizing that launching satellite 'Nour' is in line with Iran's defense policy.

The spokesman made the remarks in reaction to the US recent stance on Tehran's putting its military satellite in the orbit, describing it as interference in Iran's internal affairs.

"No resolution prevents Iran from sending satellite to space and the US quoting of UNSC Resolution 2231 is definitely irrelevant and against realities, given the fact that it is the same resolution that was violated by Washington through abandoning JCPOA," he said.

Dismissing Germany's stance towards launching the Iranian satellite, Mousavi said that German Foreign Ministry expresses concern over launch of the country's native satellite at a time when its defense minister has announced to journalists on his decision to buy a fighter capable of carrying a nuclear bomb.