TEHRAN (defapress) – A Russian military police unit blocked a US convoy that was attempting to bypass a checkpoint in Syria’s northeastern province of Hasakah.
News ID: 81005 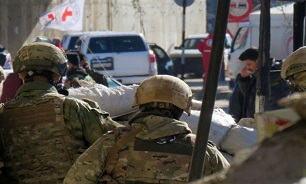 The US vehicles approached a Russian checkpoint in eastern Qamishli when the latter refused to give them access to the roadway inside the strategic district in Hasakah on Sunday, Al-Masdar News reported.

The US forces had to turn around and use another route to reach their intended destination, the report added.

According to Sputnik, at least eight Russian armored vehicles stopped the American patrol for several hours, in a retaliatory move against an earlier interception of a Russian convoy by American forces and stopping it from reaching the town of Qahtaniyah.

Back on January 31, US forces in northeast Syria prevented a Russian military convoy from touring near the border with Iraq.

Over the past few months, local residents, in coordination with Syrian forces, have prevented US forces from passing through their communities in Hasakah province.

Since late October 2019, the US has been redeploying troops to the oil fields controlled by Kurdish forces in eastern Syria, in a reversal of US President Donald Trump’s earlier order to withdraw all troops from the Arab country.