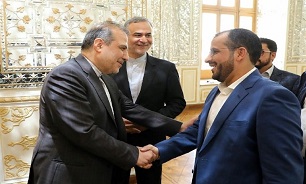 As part of Iran’s constant consultations about Yemen, Khaji held a video conversation with Abdul-Salam on Saturday.

In the conversation, Abdul-Salam praised Iran for its humanitarian assistance as well as political and spiritual support for the people of Yemen, expressed the Yemeni National Salvation Government’s readiness to achieve a fair political consensus, and briefed the Iranian diplomat on the latest political and on-the-ground developments in Yemen.

For his part, the Iranian diplomat stressed that the solution to the crisis in Yemen is a political agreement entailing an end to the war, a complete removal of the blockade on sea, land and air routes in Yemen, and the resumption of Yemeni-Yemeni talks, the Foreign Ministry’s website reported.