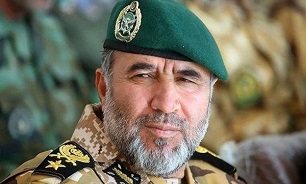 “We will have a desirable leap in area of military parts [production] in the Year of Surge in Production and we have put good plans on agenda for developing robots, helicopters, anti-armor and anti-missile equipment, quadcopters, drones and different types of border monitoring sensors,” General Heidari said on Sunday.

He added that Iran has gained self-sufficiency in production of defensive weapons and equipment, noting that the Ground Force has made desirable success in production of hand-thrown drones and their maintenance.

The Iranian Army has in recent years made double efforts to increase its defensive and combat power.

General Heidari had also announced in February that the Army's Airborne Unit has boosted the range of missiles fired by helicopters.

"Today, the range of Army Airborne Unit's missiles has increased to a very desirable level and we have achieved self-sufficiency in the field of night-vision systems and we can fly over night and destroy targets," General Heidari said.

He described the Iranian Army's Airborne Unit as the biggest helicopter fleet in the Middle-East.

Elsewhere, General Heidari also said that the Iranian experts at the defense ministry in cooperation with other industries inside the country have managed to overhaul 33 helicopters for future missions.

General Heidari had announced in 2018 that the Army's Airborne Unit had tripled the range of missiles mounted on its helicopters.

"Three major changes have been made in the Airborne Unit, including, equipment of helicopters with night-vision systems, tripling the range of missiles mounted on them and increasing the speed of overhaul," General Heidari told reporters in Tehran at the time.

He also underlined that the country has established the most powerful helicopter fleet in the region.

"The Islamic Republic of Iran's Airborne unit has paved the path of progress very well since the victory of the Islamic Revolution in a way that today, we have the most powerful helicopter fleet in the Middle-East," General Heidari added.

He stressed that the army's Airborne unit is always ready to defend the country against different threats, including the terrorist groups.