JCPOA none of US, Brian Hook's business

TEHRAN (defapress) – Iranian Foreign Minister Mohammad Javad Zarif has reacted to the US officials' baseless claims and accusations about JCPOA and UN Resolution 2231, noting that JCPOA is none of US' or Brian Hook's business since the Americans have pulled out of the deal.
News ID: 81096 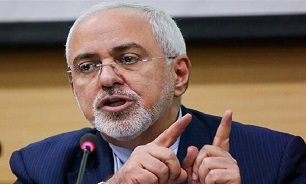 "It is not unexpected from those who advise people to inject bleaches [to treat Covid-19] to claim that they are a member of an agreement from which they have withdrawn," Zarif told reporters.

"Hook has said that there is nothing left from the JCPOA, that is not his business, either," Zarif said, "The issue is between Iran and the JCPOA parties but not the US."

He reiterated that before scaling down, Iran had fully committed its promises under the JCPOA and if other parties do their commitments too, Iran will return back to the deal.

The Iranian FM named the JCPOA a firm agreement adding that the US will know of its mistakes in the future.

The US is trying to convince the UN to extend Iran's arms embargo which is to expire in October 2020 but Iran says since Americans have withdrawn from the JCPOA they cannot have a word about the issue.

Brian Hook, the US State Department official overseeing Iranian affairs, had claimed in February that the United States could still snap back the arms embargo even though “we are out of the deal.”

US Secretary of State Mike Pompeo has claimed that the US will not allow Iran to purchase conventional arms after UN sanctions expire in October. He plans to invoke a provision in the Iran nuclear agreement, which the Trump administration pulled out of in 2018, in an effort to either extend an arms embargo on Iran or reimpose even harsher United Nations (UN) sanctions.

Noting that UNSCR 2231 and JCPOA are inseparable, Iranian Foreign Minister Mohammad Javad Zarif on May 5 explained the resolution to his American counterpart once again.

“@SecPompeo pretends UNSCR 2231 is independent from #JCPOA. He should READ 2231,” wrote Zarif in a tweet. Stating that Pompeo did not read the text of the resolution, he added, “JCPOA is PART of 2231. That's why it's 104 pages—& why he’s not read it.” “2231 for Dummies: It would NOT EXIST w/o JCPOA. US violated it & prevented others from complying. US has NO standing,” the Iranian diplomat said.