TEHRAN (defapress)- A senior member of the Iraqi parliament’s Security Commission warned that unknown helicopters and cargo planes have been landing in certain regions of Salahuddin, Nineveh and Diyali provinces where the ISIL terrorists are present.
News ID: 81123 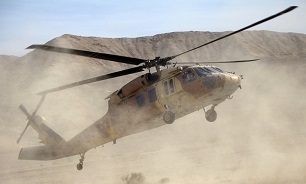 “The local people have several times seen the landing of these aircraft but the identity of their crews or the country of their origin is not known,” Jassim al-Jabarah told the Arabic-language al-Ma’aloumeh news website on Saturday.

He added that the ISIL terrorists are present in those regions that the unknown helicopters and planes land.

Al-Jabarah said that the continued flights and landings of these helicopters reminds of the Western states, specially the US, support for the ISIL terrorists in 2014, and urged the Iraqi government to investigate the issue immediately.

In relevant remarks last Sunday, a leader in Iraq’s Badr Organization said US forces have transferred Daesh (ISIL or ISIS) terrorists from Syria into Iraq amid Washington’s attempts to reinforce the American presence in the Arab country.

“Eyewitnesses living along the border with Syria have informed security officials that American forces are conducting extensive airborne transfers of Daesh terrorists from Syria to Iraq,” Mohammad Mahdi al-Bayati said.

The terrorists entered Iraq via the borders near the Kurdistan region, Bayati said, adding that the new deployment is aimed at stepping up terrorist attacks in Iraq in order to justify the presence of American forces in the country.

The US has not only defied calls to withdraw from Iraq, but has also reinforced its military presence by deploying more troops and military equipment.