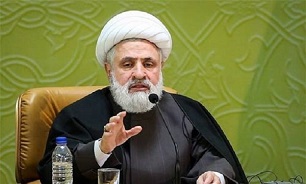 In an interview with OTV, he noted coronavirus pandemic has put the Tel Aviv regime in difficulties as it did so to Lebanon but Zionists know that Hezbollah will give a harsh response to any aggression even under the outbreak of the virus. He said Zionists' hostile activities against Lebanon are not restricted to coronavirus pandemic.

Answering a question about the messages the Zionist transmit for Hezbollah in Syria he said, "they have their own messages and we have ours but in case one from Hezbollah is targeted in Syria, we will give a response, for sure."

Addressing the US pressures on the elections in Lebanon, Qassem said everyone knows that the elections are popular, free, and democratic.

"Hezbollah is legally present in the government and the Parliament of Lebanon," he underlined.

"Hezbollah does not agree with early parliamentary elections," he said, "It is better for everyone to give a chance to the incumbent technocratic government."

He also noted that Hezbollah decides and acts upon the interests of Lebanon and is not a subordinate to Iran but Iran will benefit from Hezballah's combat with the Zionist regime and there is nothing bad in that.