TEHRAN (defapress) – Iran’s Judiciary Chief Hojatoleslam Seyed Ebrahim Raeisi said Palestine’s fate can only be decided by Palestinians, stressing that no bully power in the world can determine their future.
News ID: 81161 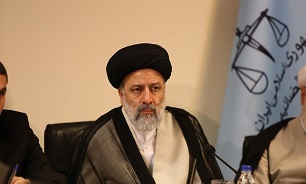 “For more than seven decades, the US and certain European governments have been trying to expel (the Palestinian) nation from their home through money, use of force, and misinformation,” Hojatoleslam Raeisi said in a statement on Thursday ahead of the International Quds Day.

The International Quds Day, which falls on Friday, May 22 this year, is an annual worldwide event during which demonstrators express their solidarity with the Palestinian people and opposition to the occupation of the Palestinian territories by the Zionist regime of Israel.

Raeisi added that only Palestinians “ have the right to decide for Palestine’s fate, and no bully power in the world can take this right away from them.”