TEHRAN (defapress) – Leader of the Lebanese resistance movement Hezbollah said the group will give a firm response to any potential Israeli attacks against Lebanon.
News ID: 81193 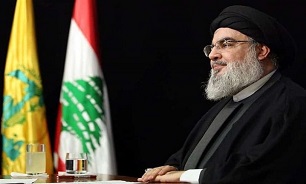 In an interview with Lebanon’s Noor Radio on Tuesday, Seyed Hassan Nasrallah called the Zionist regime a cancerous entity with no credibility in the region.

“Israel aims to occupy entire Palestine and according to this scheme, Jordan is an alternative home for the Palestinian people,” he was quoted as saying by the website of Al Manar TV.

He further said that Tel Aviv lacks the courage to wage another war on Lebanon, given the Muslim country’s defensive might.

“We warn Israel against committing a folly by launching the great war, all factions of the axis of resistance could engage in such a war,” Nasrallah said, according to Press TV.

The Hezbollah leader vowed a firm response to any attacks by the Israeli military, noting that the fake and racist entity would not manage to survive.

“We neither want a civil war nor want to rule the country,” he said. “We retaliate to any attack on our fighters everywhere.”

Nasrallah further lambasted the US military presence in the region, asserting that it “indicates the weakness of its allies” in West Asia.

On Monday, the second-in-command of Lebanon’s Hezbollah resistance movement hailed the 2000 liberation of southern Lebanon from the Israeli occupation as a “turning point” in the history of the region.

“We have moved from the stage of despair to hope, from surrender to resistance, from humiliation to honor, and from defeat to victory,” Sheikh Naim Qassem said.