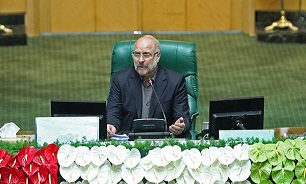 Ghalibaf pointed to the commonalities between the two countries of Iran and Turkey and added, “the friendly relations between Iran and Turkey have always been established at the highest level.”

He went on to say that the Iranian parliament welcomes and supports any kind of move for expanding and developing bilateral ties.

He further stressed the need for continuation of trilateral talks between Iran, Turkey and Russia within the framework of Astana Peace Process on Syria.

With containing coronavirus pandemic, he expressed hope that bilateral trade and economic exchanges between the two countries would normalize.

Turkish Parliament speaker strongly condemned unjust and cruel US sanctions imposed against Iran and then invited his Iranian counterpart to visit Turkey.