TEHRAN (defapress) – Baghdad will reject any attempt by the United States to prolong the presence of American forces in the country during negotiations, an Iraqi politician stated, adding that talks between the two countries can only lead to a total withdrawal of American troops.
News ID: 81248 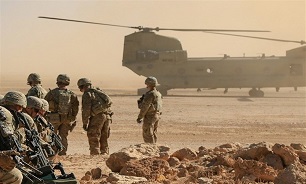 “The negotiations between Washington and Baghdad, which are to start in the middle of this month, would fail to produce any tangible results if they do not discuss the withdrawal of US forces from the country,” said Karim al-Muhammadawi, a member of the Iraqi parliament's committee on security and defense, in an exclusive interview with the al-Maalomah news agency, Sputnik reported.

Muhammadawi said that the Iraqi government must heed the parliamentary vote in January ordering the immediate withdrawal of foreign forces from the country, “especially American troops”.

“The United States is trying to stay in Iraq and seeks to achieve that goal by exerting more pressure (on the Iraqi government) and revival of Daesh. The government must nip such attempts in the bud,” the Iraqi lawmaker said.

On 9 January, former Iraqi Prime Minister Adel Abdul-Mahdi demanded that the Trump administration send a delegation to Baghdad tasked with organizing the withdrawal.

The 78-year-old said Iraq had rejected the violations of its sovereignty, in reference to US military actions which breached Iraqi airspace in the assassination of a leading PMU commander and Iranian commander Lieutenant General Qassem Soleimani at the beginning of the year.

Lieutenant General Soleimani, who was the commander of the Quds Force of Iran’s Islamic Revolution Guard Corps (IRGC), Commander of Iraq’s Popular Mobilization Units (PMU) Abu Mahdi al-Muhandis and a number of their entourage were killed in a targeted airstrike by on the order of US President Donald Trump near Baghdad International Airport in January this year.

The move led to a split in relations between Baghdad and Washington, as the Iraqi government sees the extrajudicial killings as a violation of Iraqi sovereignty.

The assassination led to the Iraqi parliament voting in a bill which will see a total withdrawal of US troops from the country.

The US has maintained a military presence in Iraq since a 2003 invasion of the country which toppled Saddam Hussein.