TEHRAN (defapress) – Tehran welcomes the expansion of relations with Baghdad following the formation of the cabinet of the new Iraqi government, said Iranian Ambassador to Iraq Iraj Masjedi.
News ID: 81277 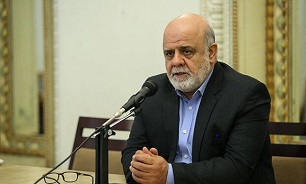 During the meeting, the two sides discussed bilateral cooperation in the field of labor and social affairs.

The Iraqi minister stressed the need to develop cooperation between the two countries, as well as Baghdad's use of Tehran's experience in this field.

Since the formation of the Al-Kazemi government, Masjedi has held separate talks with Iraqi officials including the new prime minister, as wells as ministers of interior, defense, transportation, labor and social affairs, finance and higher education. These meetings were aimed at strengthening and developing the political, economic, cultural cooperation between the two countries.

The two sides praised the relations achieved between Baghdad and Tehran and discussed the ways to expand cooperation between the two countries.

Zarif stressed the need to implement the agreements reached during the visit of the President of the Islamic Republic of Iran to Iraq.

During a historic and important trip after 5 years, on March 11, 2019, the President of Iran visited Iraq, the holy shrines, and met with high-ranking Iraqi officials.