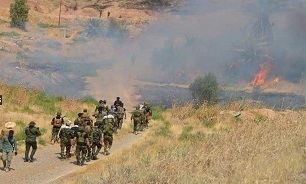 The recent operations that almost ended the presence of Daesh in the hotspots east of Salahuddin and Kirkuk, indicate that the PMF penetrated the depth of the terror group’s strongholds in al-Zarka sector where the security forces have not entered these areas before, Ali al-Husseini, a spokesman for the Popular Mobilization Units, told Shafaq News Agency on Tuesday.

He confirmed the destruction of a large headquarters of Daesh by the PMU and security forces, which contains rooms, supplies and equipment, as well as secret documents that cannot be disclosed in Al-Zarka sector, indicating that the headquarters belongs to the new Daesh leader in Iraq or a regional leader of the terrorist organization.

"The eastern areas of Salahuddin and Kirkuk are almost empty of Daesh, with the exception of individual numbers moving between the regions in search of escape havens from the security forces."

During the past few days, comprehensive security operations were launched on the northern and eastern outskirts of Diyala, with Kirkuk and Salahuddin, as well as other operations between Salahuddin and Kirkuk called "the heroes of Iraq - victory of sovereignty" to purge those areas of Daesh hotspots and dens.