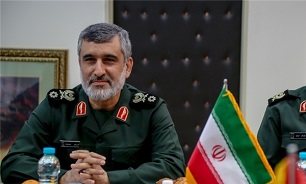 General Hajizadeh made the remarks on the anniversary of the operation that was launched as a response to the martyrdom of former Army Commander Lieutenant General Ali Sayyad Shirazi.

"The performance of the IRGC was not different in the revenge operations that were held after assassination of Army's General Sayyad Shirazi and that of IRGC anti-terrorist commander Lieutenant General Qassem Soleimani," the senior IRGC commander said.

He noted that the revenge operation for the martyrdom of General Sayyad Shirazi was extremely important for the IRGC.

Ali Sayad Shirazi was the Iranian Army's senior commander during the eight-year Iran–Iraq war in the 1980s.

He was assassinated in 1999 by the terrorist Mujahedin Mojahedin-e Khalq terrorist Organization (MKO, also known as the MEK, PMOI and NCRI) in 1999.

The MKO is supported by the Western countries, specially the United States and France.

The terrorist group has killed over 17,000 Iranian citizens since the victory of the 1979 Islamic Revolution in different terrorist attacks.

The MKO is listed as a terrorist organization by much of the international community. Its members fled Iran in 1986 for Iraq, where they received support from then dictator Saddam Hussein.

The notorious outfit has carried out numerous attacks against Iranian civilians and government officials for several decades.

In 2012, the US State Department removed the MKO from its list of designated terrorist organizations under intense lobbying by groups associated to Saudi Arabia and other regimes adversarial to Iran.

A few years ago, MKO members were relocated from their Camp Ashraf in Iraq’s Diyala Province to Camp Hurriyet (Camp Liberty), a former US military base in Baghdad, and were later sent to Albania.

Those members, who have managed to escape, have revealed MKO's scandalous means of access to money, almost exclusively coming from Saudi Arabia.