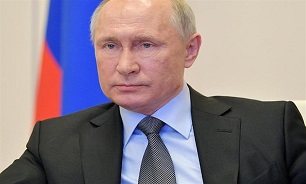 "What has happened (in the US) is the manifestation of some deep domestic crises," he said in an interview, noting that this crisis had been observed for a long time since US President Donald Trump assumed office.

"When he won, and his victory was absolutely obvious and democratic, the defeated party invented all sort of bogus stories just to call into question his legitimacy," Putin explained.

The Russian leader added that he usually tries to "comment carefully or not to comment at all what is happening in other countries."

Putin also said that the key problem of the US political system is the fact that parties place their interests above those of people, TASS reported.

"It seems to me that the problem is that group party interests in this case are placed above the interests of the entire society and the interests of people," the Russian leader said commenting on the events in the United States.

The interview was recorded in the Kremlin during the conversation with the journalist, not in the format of a video conference.

Mass protests and riots sparked in many US states following the death of African American George Floyd. He died in hospital after a police officer used a choke hold during his arrest in Minneapolis, Minnesota, on May 25. All four involved police officers were fired and charged. The National Guard joined local police in an effort to combat the riots. A curfew was introduced in nearly 40 cities, including Washington DC and New York.