US Sanctions on Syria Run Counter to Human Rights

TEHRAN (defapress) – A senior adviser to the Iranian parliament speaker said the US’ fresh sanctions against Syria, imposed under the Caesar Act, constitute a violation of human rights and international treaties.
News ID: 81350 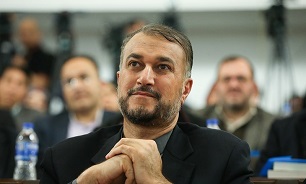 In a post on his Twitter account on Thursday, Hossein Amir Abdollahian said the US sanctions against the people of Syria under the Caesar Act run counter to the fundamental human rights and the international treaties.

“The Islamic Republic of Iran and the allies will stand by the Syrian nation and leadership vigorously,” he added.

The former Iranian deputy foreign minister underlined that the new American-Zionist plot against Syria will end in complete failure.

“Syria will be the ultimate victor in the economic terrorism war under sanctions,” he said.

On Wednesday, the US State Department and the Treasury said 39 Syrian individuals, including President Bashar al-Assad and his wife, had been designated for a load of new economic and travel sanctions.

The law, known as the Caesar Act, places anyone who does business with the 39 named individuals and government entities in the cross hairs of the US Treasury.