TEHRAN (defapress) – Iran’s Foreign Minister Mohammad Javad Zarif slammed Germany, France, and the UK for sponsoring a resolution at the IAEA against Tehran, calling on the three European countries to muster the courage and admit their failure to honor their commitments under the 2015 nuclear deal.
News ID: 81359 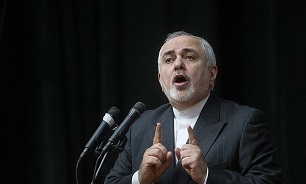 “E3 must stop public face-saving & muster the courage to state publicly what they admit privately: their failure to fulfill even own JCPOA duties due to total impotence in resisting US bullying. Behind facade, E3 are accessories to Trump & Netanyahu—& in no position to counsel Iran,” Zarif tweeted late on Friday.

The resolution, submitted by France, Germany, and the United Kingdom, was adopted by a vote of 25 to 2 with 7 abstentions. It comes at a time when the United States is working to extend an arms embargo against Iran.

Iran’s permanent representative to international organizations in Vienna, Kazem Gharibabadi, also slammed the IAEA Board of Governors for adopting the resolution, saying that the Islamic Republic will take “appropriate action” in response.

The Trump administration exited the deal known as the Joint Comprehensive Plan of Action (JCPOA) in 2018, but other signatories vowed to salvage it.

Washington is now working to extend a UN-imposed arms embargo due to expire in October under Tehran’s nuclear deal.

According to the IAEA’s 129-page 2019 Safeguards Implementation Report, Iran received the biggest part of the inspections that were carried out worldwide by the atomic organization’s inspectors, and the figure stood at 21 percent of the entire visits made to various nuclear sites.