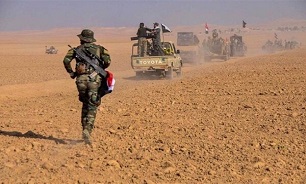 Hashd al-Sha’abi announced on Saturday night that heavy clashes between its forces and ISIL terrorist forces have been occurred in Saladin.

The clashes started on Saturday night in the south of Saladin province and continued till this morning, according to Hashd al-Sha’abi.

One of Hashd al-Sha'abi's forces was martyred and three were injured during the clashes.

Iraqi Hashd al-Sha’abi and security forces launched a new security operation on Saturday in the Yasreb region in Samarra.

In recent months, various areas of Saladin province have been the site of ISIL hideouts, and Iraqi military forces have carried out dozens of operations in the province.

Hashd al-Sha’abi forces have launched a series of operations against ISIL members in Al Anbar, Nineveh, Saladin governorates since the middle of last month.