Nasrallah Raps US Interference in Lebanon

TEHRAN (defapress) – The Secretary-General of Lebanon’s Hezbollah resistance movement denounced the US’ interference in the internal affairs of Lebanon, saying Washington is a sponsor of Israel and Takfiri terrorism.
News ID: 81476 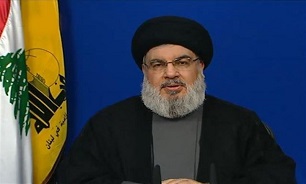 In a televised speech via Al-Manar on Tuesday, Seyed Hassan Nasrallah Nasrallah slammed the behavior of US Ambassador to Lebanon Dorothy Shea, said she is acting “like the military governor of our country”, and lashed out at Washington’s meddling in Lebanese internal affairs.

“The US ambassador to Lebanon has been openly interfering in our internal affairs. US’ meddling in Lebanon is rejected and the Lebanese state must move in this regard,” he added.

“I advise the US ambassador not to give lectures on freedom, sovereignty and human rights, for she doesn’t have the right to do so. Your country (US) has been funding and supporting the Israeli and Takfiri terror. So respect yourself and keep within limits.”

The Hezbollah leader also advised Washington to abandon its policy of besieging Lebanon and exerting pressure on it, saying: “Your policy is futile; it won’t weaken Hezbollah but rather will strengthen him and weaken your allies.”

He further stressed that Lebanon’s current crisis must not divert from supporting the Palestinian cause “especially now as the Zionist regime is planning to annex areas of the West Bank and Jordan Valley.”

He underlined that the Islamic Republic is a self-sufficient country, wondering, “Why are you afraid of this model?”

“In this regard I prefer that official talks between Lebanon and Iran take place away from media, and I can guarantee such offer.”

“Heading east is one of choices to confront starvation. This choice sends a message to the US that whoever wants to besiege Lebanon will fail in this policy,” he underscored.