Envoy urges creating a club of states hit by US sanctions

TEHRAN (defapress) – Iranian Ambassador to the Russian Federation Kazem Jalali called for setting up a club of countries which have been hit by the US sanctions.
News ID: 81593 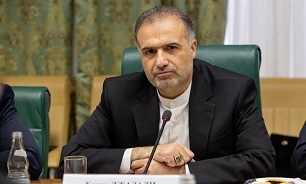 Speaking in an interview with “Kommersant” newspaper on Tue., Jalali proposed the creation of a club of countries that have been hit by the US sanctions.

Countries, that are at the target of pressure from sanctions imposed by Washington, can consolidate their efforts to counter US policy, he emphasized, noting that major powers such as Russia, Iran, and China can work together to counter US sanctions policies.

It is time to create a club of countries affected by US sanctions, he said, adding, “among the members of this club, big powers such as Russia, China and Iran will attend this club which have developed economies.”

He went on to say that these powers must help each other repel the negative effects of US measures taken against these countries.

“We have great opportunities and we just have to show political will and try to use this potential properly. Iran has something to offer to China and Russia. We are a large country with a large and relatively young population, so we have abundant mineral resources and advanced technologies. If we work together, we will overcome US pressure,” Jalali underscored.

He also said that the Islamic Republic of Iran is interested in buying new Russian weapons and “we will talk with the Russian side in this respect.”