TEHRAN (defapress) – Iran’s ambassador to the United Nations expressed confidence that the UN Security Council will reject a watered-down draft resolution prepared by the US to extend an arms embargo against Iran.
News ID: 81784 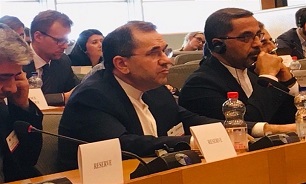 “Rebuffed by UNSC members, US was forced to retreat from its draft resolution on Iran arms embargo, and proposed another version—also violating 2231—today. The new draft is similar—in its NATURE and GOAL—to the previous. Confident that the Council will—again—reject this move,” Majid Takht-Ravanchi tweeted on Wednesday.

The tweet came after the Trump administration on Tuesday backed away from a hardline resolution and streamlined its bid to get the UN Security Council to extend the arms embargo on Iran.

The new text is just four paragraphs and would extend a weapons ban on Iran “until the Security Council decides otherwise,” stating that is “essential to the maintenance of international peace and security.”

The 13-year-old arms embargo is due to expire in October under the 2015 nuclear between Tehran and world powers.

The previous US draft resolution was described by diplomats and analysts as “maximalist.” It was more than a dozen pages long, would have required countries to inspect cargo going to or coming from Iran and included an annex of individuals and entities for targeted sanctions.

Diplomats said that while the new simple draft text might win the United States some more votes, it was unclear if Washington could get the minimum nine votes needed, and they said it was unlikely to convince Russia and China to abstain.

“Don’t let the brevity of the new US draft fool you. The key point is that it authorizes an indefinite extension of the Iran arms embargo ... and China and Russia will *not* like that,” Richard Gowan, UN director for conflict prevention advocacy body the International Crisis Group, posted on Twitter.

“So good chance this US draft will fail by Friday,” he said.

The United States has asked council members for comments by Wednesday morning. The council is operating virtually so once a vote is called, members would have 24 hours to submit their response. The result would be announced at a public meeting.