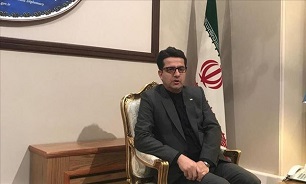 Mousavi said on a Twitter post that he has held negotiations with Azeri officials and visited Iranian traders active in Baku in line with getting the two nations closer to further develop mutual cooperation.

He noted that he has started his mission just a few days ago and presented his credentials to the Azeri president.

Mousavi was the former spokesman of the Iranian Foreign Ministry.

In relevant remarks on August 21, he underlined the need for strengthening bilateral ties between Tehran and Baku, saying that both neighboring countries are keen to expand cooperation.

"I am very happy to start my work today in the neighboring, friend, brother and Muslim country of the Republic of Azerbaijan," Mousavi said on Friday August 21 upon his arrival in Baku to start his mission as Iran's new ambassador.

He noted that the Islamic Republic of Iran and Azerbaijan Republic have deep ties and commonalities and high-ranking officials of the two countries are set to deepen and develop these relations.

"There are good opportunities for the development of relations, which can be at the service of national interests of the two countries," the ambassador stressed.