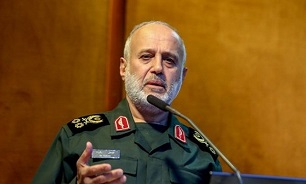 “We have understood the elements of power and learned methods to use them and we hope that the enemies avoid testing the Army and IRGC’s determination and power,” General Rashid, Commander of Khatam ol-Anbia Headquarters, said on Wednesday.

He added that the Iranian Armed Forces have gained highly appropriate combat power after four decades of the Islamic Revolution, confrontation against security crises and 8 years of fighting against Iraq in Saddam era.

In relevant remarks earlier today, Deputy Commander of the Iranian Army Rear Admiral Habibollah Sayyari warned enemies that the country will not confine itself to West Asia region to respond to any possible threats and strategic mistakes.

“The enemies of the Islamic Republic should know that in case of any strategic mistake by them, the Islamic Republic of Iran’s geography of battle and scene of response to their measures will not be limited to West Asia region and they will face a vast scene of battle,” Rear Admiral Sayyari said on Wednesday.

The high-ranking Iranian military commanders have on different occasions warned of the country’s harsh response to any threat by enemies, specially the US.

In April, Commander of the Islamic Revolution Guards Corps (IRGC) Major General Hossein Salami warned the US forces against any act of sabotage to threatening move in the Persian Gulf.