Venezuela Considers New US Sanctions Against Maduro as Aggression

TEHRAN (defapress)- The Foreign Ministry of Venezuela in a Monday statement denounced recently-announced US sanctions against President Nicolas Maduro as "aggression".
News ID: 82082 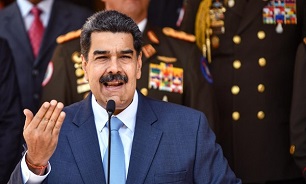 "Venezuela rejects and condemns before the international community the new aggression by the US government, which has announced unilateral sanctions against Venezuelan President Nicolas Maduro without any grounds as part of an ongoing campaign of aggression against Iran, Venezuela and the entire UN multilateral system," the statement read, Sputnik reported.

According to the statement, Washington's announcement of sanctions against Maduro was "another attempt to ignore the institutionality of the United Nations", particularly the UN Security Council.

"This new action against multilateralism confirms that the ruling elite of the United States has no respect whatsoever for joint decisions necessary to preserve international peace and security," according to the statement.

Venezuela highlighted in its statement "its irreducible commitment to the United Nations", stressing that "no intimidating and arrogant action by the US government will prevent it from exercising its sovereign right to establish economic and commercial relations freely with the Islamic Republic of Iran and with any State".

The statement followed an earlier Monday announcement by Secretary of State Mike Pompeo of new US sanctions against Maduro, along with introducing new sanctions against the Iranian Defence Ministry and other officials related to the country's missile and nuclear programmes.

Announcing the new sanctions, Pompeo referred to the "snapback mechanism" described in UN Resolution 2231 under the Joint Comprehensive Plan of Action, which envisaged punitive measures against Iran if the nation violated the nuclear agreement.

The administration of US President Donald Trump unilaterally exited the agreement in 2018, and EU and UN officials now criticize the White House for attempting to use a mechanism contained within a treaty of which it is no longer a signatory.

Venezuela saw a tough economic embargo from the United States, which forced the country to import gasoline and oil from Iran. President Maduro has repeatedly accused Washington of attempting to overthrow his government so that the United States could seize Venezuela's vast oil and gas reserves.

A political and economic crisis in Venezuela was exacerbated in the beginning of last year, when opposition leader Juan Guaido proclaimed himself interim president in an attempt to unseat Maduro. The US, along with other countries, recognized Guaido as the Venezuelan president, while Russia and China supported Maduro as the country's legitimate leader.