TEHRAN (defapress)- 300 Syrian militants have been sent to Baku via the Turkish city of Gaziantep to fight in Karabakh, French President Emmanuel Macron said at the EU summit on Friday.
News ID: 82170 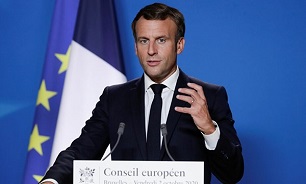 "I can confirm that, according to our data, 300 militants have left Syria to arrive in Baku via Gaziantep. These militants have been identified, they are members of a jihadist group that is operating near Aleppo", Macron said, Sputnik reported.

Reports of mercenaries from Syria recruited to fight in the Karabakh region emerged earlier, but have not been provided with any exact evidence.

CNN reported about Syrian militants in the area earlier in the day, citing a Syrian national who has allegedly signed up for deployment.

Ankara has been among few nations that have openly expressed support for a party to the conflict, pledging to support Baku "with all means".

The European countries have repeatedly called on the parties to immediately stop fighting and return to negotiations.

"We call for the immediate cessation of hostilities. We are taking joint efforts with other international actors to resume the political dialogue within the OSCE Minsk Group," President of the European Council Charles Michel said on Friday.

Meanwhile, Russian Permanent Representative to the United Nations Vassily Nebenzia said Russia sees no political will among the parties to end the clashes, adding that Russia does not support one party over the other, but advocates a ceasefire and a resolution of the conflict.